Despite his impressive NL MVP campaign, Paul Goldschmidt has found himself in a bit of a slump. As we explain in our MLB player prop picks for September 15, tonight's matchup against Cincinnati presents the perfect opportunity for him to break out of it.

It’s a bit of a lighter day on the diamond with just eight games on the MLB schedule but that doesn’t mean there isn’t plenty of baseball betting value to be found in the player prop market.

Today, we find some value in a trio of total bases props. Two for a couple of AL shortstops who are absolutely raking at the moment, and the other for the odds-on favorite to win the NL MVP, who has started September off in a bit of a slump.

Back to Bo's flow

The month of September that Toronto Blue Jays shortstop Bo Bichette is having is reaching the “not of this world” level, and he’ll look to stay hotter than a neutron star when the Jays try to take four games in this rare five-game set against the Tampa Bay Rays.

Those who watch the Blue Jays every day have seen an improved approach from Bichette at the plate, keeping his head down and letting the ball come to his bat and has been willing to take the ball the other way — and the results have been phenomenal.

Bichette has racked up 29 hits in 60 at-bats (.483) in the month of September and owns an impressive 1.535 OPS. That includes 16 extra-base hits (seven dingers). As a result, he's cashed the Over on his total bases prop 11 times in 14 games played this month.

This afternoon, he’ll dig in against Rays ace Shane McClanahan. The hard-throwing left-hander was getting Cy Young consideration before a shoulder injury put him on the injured list at the end of August.

But time and time again during this streak, Bichette has proven he can hit against anyone. And the reason we are still getting +130 on this prop is because of McClanahan’s name. But the southpaw will have to knock off some rust and the Rays likely won’t push him too hard in his first start back.

It’s hard to believe we are still getting plus money like this on this prop. Fade Bo’s flow at your own risk.

The Minnesota Twins are hanging in the AL Central Division race by a thread and if they want to keep pace with the Cleveland Guardians they need to take advantage of their matchups against the likes of the Kansas City Royals, like the one tonight for instance.

That means getting good performances from their best players, starting with Carlos Correa. To be fair, he's picked up his game of late and has hits in nine of his last 10 games, good for a .409 batting average and a 1.263 OPS which includes nine extra-base hits over that span.

Tonight, he gets a juicy matchup against Royals starter Daniel Lynch. The Kansas City left-hander has pitched to a sub-par 5.07 expected ERA and is surrendering a .276 expected batting average to opponents. And Correa has really had Lynch’s number, owning a .412 batting average in 17 career at-bats against Lynch.

With Correa also hitting a solid .287 with a .900 OPS when facing left-handers this season, at plus money, he’s a solid bet to go Over 1.5 total bases in this one.

Check out the latest betting odds to win the NL MVP and St. Louis Cardinals first baseman Paul Goldschmidt is running away with the award. It’s not hard to see why with his .324 average, 1.015 OPS, 35 home runs, and 109 RBIs.

That said, Goldschmidt has cooled off a bit in September, hitting just .231 with a .784 OPS, but this little cold spell might just be giving us a little value on his total bases prop for tonight’s matchup against the Cincinnati Reds.

Hands up if you realized Chase Anderson was a member of the Reds. Yeah, me neither. Anderson is making his fourth start with the Reds and the veteran has pitched to a 7.15 ERA since the start of 2020. The right-hander has already made one start and one relief appearance against the Cardinals during this stint with Cincy, surrendering seven runs on five hits in just 2 1-3 innings of work.

Anderson’s latest start was his longest, lasting four innings against the Milwaukee Brewers, so it feels like five innings would be his max in this matchup before handing the ball to a bullpen that ranks dead last in MLB in ERA.

Looking at Goldschmidt’s track record this season, don’t expect this mini-slump to last much longer. The combination of the matchup and the price makes the Over on his total bases today a good value. 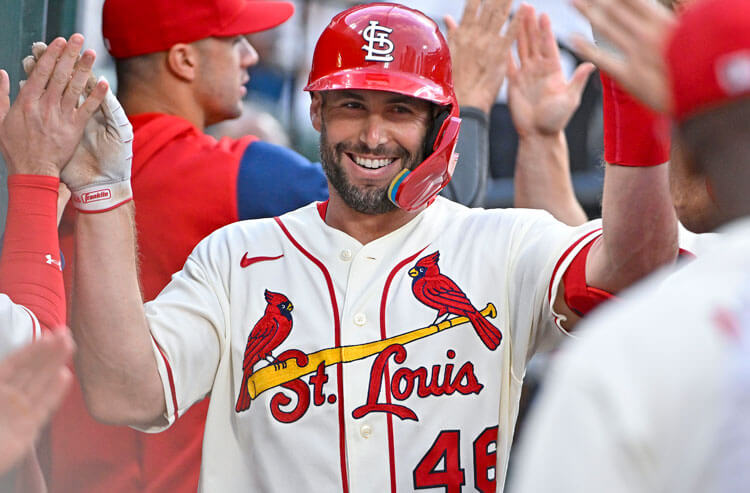