The Toronto Blue Jays welcome in the Baltimore Orioles for a weekend series between these two AL East rivals. Bo Bichette has been a props machine this month and we like him to stay that way. Read more in our Orioles vs. Blue Jays betting picks.

While it may not have ended the way they would have liked, the Toronto Blue Jays still walked away from their five-game set against the Tampa Bay Rays with a series win and a share of the top spot in the American League Wild Card race.

But they won’t have much time to dwell on that, as the upstart Baltimore Orioles come to town with the hopes of cutting into that lead during a three-game weekend series at Rogers Centre.

And as these division rivals do battle once again, it will be interesting to see if the O’s will have an answer for red-hot Jays’ shortstop Bo Bichette.

But have sportsbooks finally picked up on Bo’s current flow and adjusted his total bases prop? And quite frankly, do I care if they did? Find out in my free MLB betting picks and predictions for this AL East battle between the Orioles and Blue Jays.

Bo Bichette is a huge reason the Blue Jays are 11-4 in the month of September and where they are in the pennant race, as they head into this series with the Orioles.

Bichette is incredibly locked in at the moment. So much so, that it appears it doesn't matter who he is facing. That's because he's doing a much better job of keeping his head down and letting the ball come to his bat and has been willing to take the ball the other way — and the results have been phenomenal.

The Jays’ shortstop has tallied 31 knocks in 64 at-bats (.484) in the month of September and owns an impressive 1.499 OPS. That includes 17 extra-base hits (seven dingers). As a result, Bichette has been cashing the Over on his total bases prop like he was an ATM.

Bichette has gone Over 1.5 total bases 12 times in 15 games this month, including in each of the last five games.

Tonight, Bichette will dig in against Orioles starter Jordan Lyles. The veteran right-hander has been OK for the O’s, pitching to an expected ERA of 4.96 while giving up a .268 — both in the Bottom 13 % of the MLB.

Now, we aren’t getting the foolish +130 value books have been giving us the last couple of days (still confuses me that we were getting that number) but close to even money isn’t bad for a guy who is hotter than the surface of the sun.

There’s no way we are fading Bo while he’s still in his flow.

The Blue Jays opened this American League East matchup as sizeable -165 home favorites but right off the bat, the Orioles feel undervalued in this spot.

Yes, the Jays have a dangerous lineup and have played well in September with an 11-4 record. However, they will use a bullpen day in the opener of this series with the Orioles. That likely means Yusei Kikuchi will see multiple innings as a bulk guy. That’s not a good thing.

The left-hander has never really figured it out with Toronto and is pitching to an expected ERA of 6.00, surrendering an expected slugging percentage of .484 to opponents. The O’s have also had Kikuchi’s number this season, getting to him for 16 runs (13 earned) in 13 innings pitched against them.

Even though Jordan Lyles isn’t a dominating pitcher by any means, he’s got a good chance to bounce back after a rough outing against the Red Sox. Lyles has also done a decent job against this Jays’ lineup, holding them to six earned runs on 13 hits over 10 2-3 innings of work.

The Orioles should also be motivated for this one. Baltimore is still just 4.5 games out of the final Wild Card spot and can cut into that with a good weekend in Toronto. The O’s can also return the favor after the Jays went into Camden Yards and took three-of-four last week.

At +140, all the value is with the Orioles tonight.

When it comes to the total, I would still lean towards Over 9 runs. I already noted why I think the Baltimore offense can be successful in this matchup, but there’s more.

Toronto obviously has one of the better lineups in the MLB and they handle right-handed hurlers well. The Blue Jays rank second in batting average and OPS, plus third in wRC+ when digging in vs. righties this season. The Jays should be familiar with Lyles by now and should be able to do some damage against him.

And despite getting shut out yesterday. the Jays are still averaging 4.7 runs per game in the month of September.

On top of that, these two AL East rivals have faced off nine times since the start of August, where they have combined for a total of 9.7 runs per game with the Over going 6-3 in those contests.

Jordan Lyles (10-10, 4.62 ERA): Lyles was rocked in his last outing, surrendering eight runs on seven hits in 3 2-3 innings against the Guardians. Prior to that, the right-hander had a respectable 3.02 ERA over eight starts since the All-Star break.

Starter TBD: It's expected to be a bullpen game for the Blue Jays tonight, and their collection of relievers have been much better since the trade deadline. The unit now owns a 3.74 ERA as a group, and that's good for 12th in the MLB. After losing 11-0 yesterday, nearly all of the Jays' high-leverage arms will be available for this one.

The Over is 7-2-1 in the last 10 games that these two teams have played in Toronto. Find more MLB betting trends for Orioles vs. Blue Jays 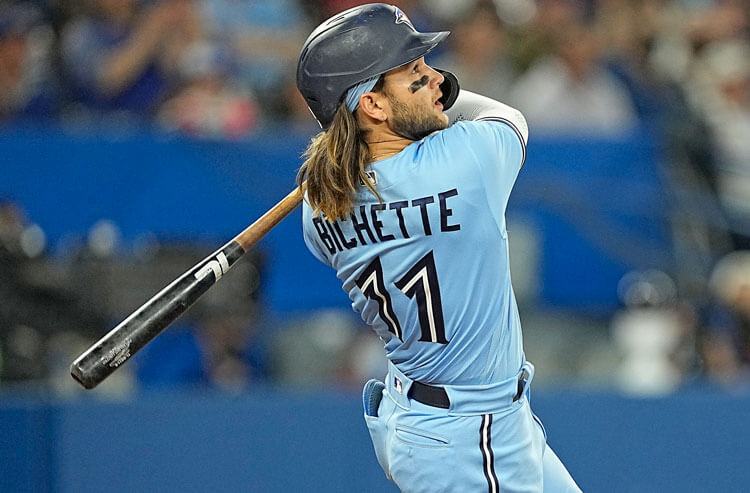