Both starters in this game — Miles Mikolas and Adrian Houser — are in great form and pitching better than their season-long statistics suggest, giving us some value on a particular prop bet. We break it all down in our MLB betting picks below.

We have the first matchup of this two-game NL Central intradivisional series with the Milwaukee Brewers hosting the St. Louis Cardinals. These two clubs have gone back and forth all season as they now face each other for potentially the final time of the campaign.

Will the Cardinals take care of business as a short road favorite or can the Brewers pull off a much-needed victory at home? Find out in our free MLB picks and predictions for Cardinals vs Brewers on Tuesday, September 27.

Cardinals vs Brewers picks and predictions

I am not a huge NRFI guy, but this game presents a great situation for it to be a strong play. Right-hander Miles Mikolas is taking the mound for St. Louis in this contest and should be an excellent candidate to back in this game.

Through 31 starts this season, Mikolas is 11-13 with a 3.35 ERA and 1.04 WHIP. While he has been strong all season, he enters this game in particularly good form.

Over Mikolas’ last eight starts, he boasts a 2.94 ERA and 0.90 WHIP. One of those outings came against the Brewers, a start in which Mikolas allowed just two runs on four hits through eight fantastic innings. The NRFI cashed in that game and has hit in seven of his last eight starts.

This strong pitching should continue against Milwaukee, a team that he has fared well against over the past few seasons. Across 165 career plate appearances against the right-hander, this current Brewers roster possesses a mere .209 BA, .361 SLG, and .261 wOBA.

Since August 1, Milwaukee ranks just 23rd in the league in BA when facing right-handed pitching. On the other side, right-hander Adrian Houser is taking the mound for the Brewers.

We are getting some value in the NRFI because Houser’s surface-level stats are not the strongest this season. He is, however, entering this game in much better form.

Over Houser’s last five appearances on the mound, he is 2-0 with a 2.61 ERA and 1.09 WHIP and that strong pitching should continue against the Cardinals, a team he's fared well against in his career.

Through 13 appearances against the Cardinals, Houser boasts a 2.89 ERA. Part of the reason we are only targeting the NRFI is that Houser typically does not go deep into games, pitching six or more innings just once over his last seven outings.

Looking to bet on some MLB action? Here are two of the best bonuses* available:

I would lean towards the Cardinals moneyline in this contest but am not confident enough to pull the trigger. Mikolas is a stud and is going against a team he has had plenty of success against in the past.

Additionally, the Cardinals hit right-handed pitching well as they rank in the top half of the league in BA, SLG, OPS, and wOBA since August 1. However, Houser is in great form in this game and has also fared well when pitching against St. Louis.

On top of that, the Brewers are fighting for their playoff lives and have the advantage of playing in front of a home crowd with the season winding down. The moneyline is almost at a pick‘em, which I believe is an accurate price given that this game should be a coin flip.

For those reasons, I'm staying away.

As you can probably guess by now, I would lean towards taking the Under in this game. Both pitchers are strong and the Brewers’ lineup is wildly inconsistent.

So why not take the Under? I don't trust the Brewers’ bullpen at all.

Since August 1, Milwaukee’s relief pitching ranks just 17th in the league in ERA, 18th in SLG, and 21st in FIP. With a strong Cardinals lineup coming into town, we always have to be cautious with the Under as they can explode for a ton of runs at any time.

In a game where the Brewers' bullpen will likely finish the last four innings at a minimum, I will gladly pass on the total.

Cardinals vs Brewers trend to know

Miles Mikolas (11-13, 3.35 ERA): Making his 32nd start of the season for St. Louis, Mikolas will look to finish off yet another fantastic year. Entering this game in great form, he boasts a 2.94 ERA and 0.90 WHIP over his last eight starts. The NRFI has cashed in seven of those eight outings (88%), including a game against Milwaukee. Mikolas boasts a five-pitch arsenal and does an excellent job mixing his pitches, throwing no pitch more than 27% of the time. This unpredictability creates frustration for opposing hitters and is a partial reason for his success.

Adrian Houser (6-9, 4.62 ERA): Making his 22nd appearance on the mound for Milwaukee this season, Houser will look to continue his recent stretch of strong pitching. Over his last five outings, he is 2-0 with a 2.61 ERA and 1.09 WHIP. Possessing a five-pitch arsenal, Houser heavily relies on his sinker, throwing it 49.2% of the time. 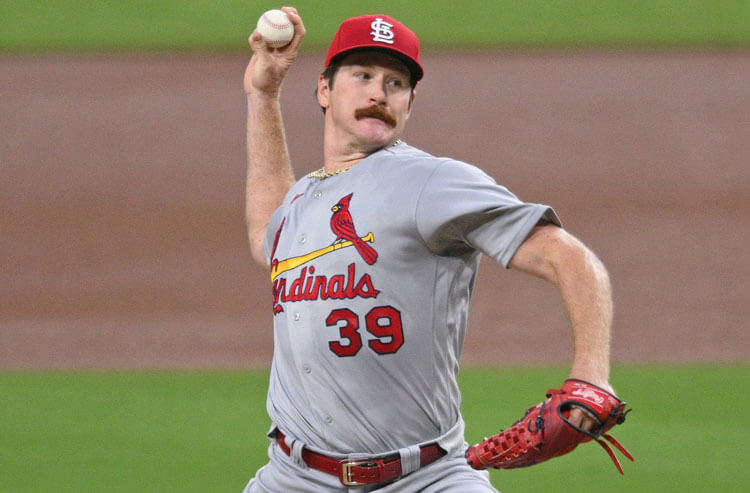