A dominant 2022 for Red Bull and Max Verstappen is in the books and the page has turned to 2023 — with Verstappen favored to secure the three-peat. We've got the full Drivers' and Constructors' Championship odds for you below.

The 2022 F1 season started with promise of a title fight between Red Bull and Ferrari, and its lead drivers, but quickly became a one-team season.

Both Max Verstappen and Red Bull comfortably secured their respective titles in '22, in a jarring departure from a '21 season that went down to the very end.

With Mercedes and its drivers, and Ferrari and its pair, sure to throw everything back at Red Bull in 2023, F1 betting odds are on the board and intriguing from top to bottom. With another month before the new season, here's an early look at Drivers' and Constructors' Championship odds.

Looking to bet on F1 action? Here are two of the best bonuses* available:

In winning his second consecutive title in 2022, Max Verstappen put together the single-most successful season in F1 history. The Dutchman won a record 15 races and ended the season with a 146-point gap ahead of second-place Charles Leclerc.

Verstappen is a generational talent and should be expected to contend again in '23.

Despite finishing sixth in 2022 — the first year of his career without a race win — Lewis Hamilton opens as the second favorite to win the '23 title. Mercedes turned it around by the end of the season and both the reputation of driver and team give them a considerable amount of faith before the new season.

While Leclerc finished second in '22, it was a frustrating and discouraging season. The Monegasque driver would have fought with Verstappen down to the end of the season with an adequate team around him but sadly, Ferrari failed him.

The 2022 season was an all-time one for Red Bull. The Constructors' Champions won 17 of 22 races, totaled 28 podiums, and won the title by 205 points. A cost-cap breach will lead to punishments for Red Bull's 2023 development but not enough to move it off favorite status.

The German outfit was a dynastic team in the 2010s but was humbled in 2022. Though a race win in Brazil and second-half improvements salvaged a tough season, it still finished third after eight straight titles.

As the sport's premier team with a superb driver pairing, Mercedes should be expected to be in the fight next season.

Much like it did to Leclerc, Ferrari sabotaged its own title chances through ineptitude. Yet, with endless resources and a strong driver pairing, the Italian team will no doubt be back in the picture in '23 — provided it can get out of its own way.

The 2010s began with a dynastic run for Red Bull and Sebastian Vettel and history may be repeating itself. Max Verstappen has won consecutive Drivers' Championships, with Red Bull nearly securing a 1-2 in 2022.

Mercedes had won the Constructors' Championship in eight straight seasons, before Red Bull finally returned to the mountain top in 2022.

How to bet on F1 futures odds

The most popular way to bet Formula One futures is by simply picking the winner of the F1 World Drivers' Championship. The champion is crowned via a points system based on the final race results of each drive. While the winner is not officially given the title until the final race of the season they can secure the championship with races remaining on the schedule.

Another F1 futures bet is the World Constructors' Championship which is awarded to the constructor (the team that builds the components of the car) who accumulates the most points at the end of the season. In 63 seasons, only 11 times has the winning constructor not been on the same team as the winner of the World Drivers' Championship.

This means that on a $100 bet, you'll stand to profit $1,200 if Norris wins the Drivers' Championship. If it's close to the end of the season or one driver is simply that dominant, you might see a minus sign (-) ahead of their odds.

This means that you would need to bet $175 to win $100 on Hamilton winning the Drivers' Championship.

Red Bull's Max Verstappen is a -138 betting favorite to win the Drivers' Championship.

Red Bull is a +100 favorite to win the Constructors'. 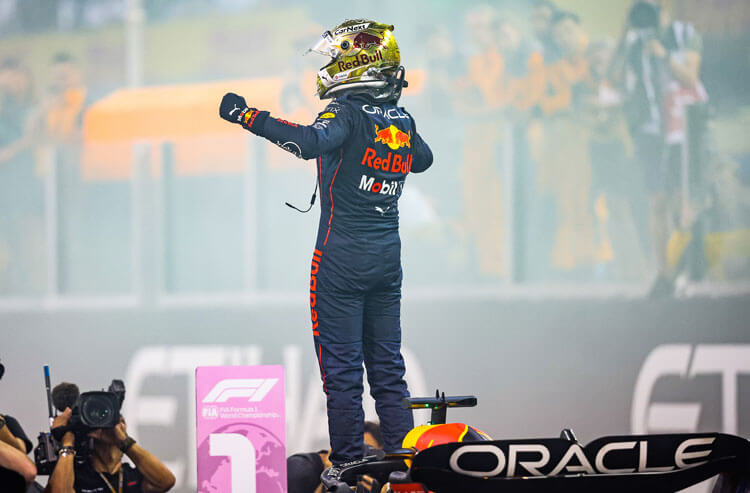